The boy’s soccer team hung tough with Delta much of the game before three quick goals midway through the second half put the game away for the Eagles. The Bruins fell to Delta 4-0. Colton McNeal led the Bruins with 5 shots. Mark White had 2 non-goalie saves. Charlie Cranston had 13 saves in goal.

Coach Batman explained, “Delta is having a really good season this year. Their team was physical, fast, and played their system well. Their experience showed tonight. 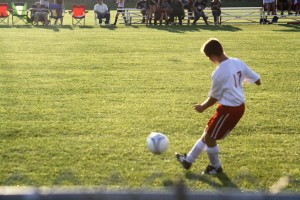 “We were competitive with this team in the first 40 minutes of play. We went into the half at 1-0. Our guys created opportunities to score, we couldn’t capitalize on them. Colton McNeal had a superb game and helped keep the pressure on their defense. We were unsuccessful in maintaining possession which allowed Delta to have some quick counter attacks.

“We are going into a more the second half of the season in better spirits and with better statistics than previous seasons. I feel confident with the soccer am I seeing this team play. We have to learn to play a full 80 minutes before the wins start to come instead of the 60 minutes we are playing competitive right now. Thursdays game against Jay County will be a fun one. These guys have had this game on their radar since last year. Let’s bring it Bruins!”