The Bruin football team got in a 14-0 hole in the first three minutes of the game but after a long Blaine Riddle 72 TD, the Bruins played as well as they have played this year if not in a couple-three years the rest of the way before falling to the Eagles (4-1), 42-28.

The teams then traded touchdowns the remainder of the game. After falling behind 20-6, Carson Kinder raced 43 yards for a touchdown. Blaine Riddle’s conversion made it 20-14. After an 4 yard TD pass by the Eagles, Shane Elam scored on a 2-yard run to make it 26-20 at the half. 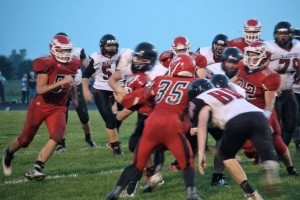 Frankton’s QB escaped a possibly tackle at the line of scrimmage before racing 80 yards for a touchdown to put the Eagles up 34-20. Blaine Riddle would score one more time on a 10-yard run to cut the lead to 34-28. The Eagles scored on a 46 yard run to put the game away.

The Bruins amassed 332 total years, all but 15 coming on the ground. Blaine Riddle had a career day rushing for 167 yards on 18 carries. Carson Kinder ran for 79 yards on 9 carries. Austen Lancaster added 72 yards on 12 carries. All three were over 6 yards a carry for the night. Riddle caught the lone pass from Shane Elam for 15 yards.

The Bruins head to Alexandria on Friday for a Tiger Homecoming game at 7pm.