Coach Batman spoke after the game, “Oak Hill is a possession heavy team. They move the ball well and have a great handle of moving with and without the ball. They were able to get a few 1 on 1 attempts against Charlie that they were able to finish.” 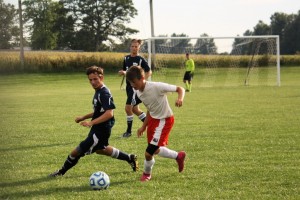 Batman continued, “Quinten Howard had a great free kick on the goal that Keaton was able to put it in the back of the net. Our shot attempts were down but most of them were quality looks. It wasn’t our best offensive game since Oak Hill maintained most of the possession, but defensively this was the an outstanding game for us. We worked on a few things Wednesday at practice that our defense put into the game which improved how we defend in certain situations. Our midfield was supportive defensively all night which was great to see.”

“This was a great effort tonight by our guys. We showed intensity and focus that I haven’t seen before. We are going into Saturday’s game against Eastbrook with a much better style of play than we have had the past few games'” Coach Batman concluded.

The Bruins are making up a game on Saturday with Eastbrook at 10am. It was called earlier in the season due to lightning.