The varsity football team played well on Friday in defeating Taylor 28-6 and ending a 20 game losing streak.The Bruins had lost to the same Titans last year in round one of sectional play 38-7.

Carson Kinder rushed for 118 yards on 11 carries and scored twice to lead the offense. Blaine Riddle, Shane Elam, Austen Lancaster, and Jacob Deavers each rushed for over 40 yards. Elam completed the only pass for the Bruins in six attempts for 50 yards to Lancaster. The Bruins amassed 353 yards of offense while holding Taylor to a mere 135 total yards. 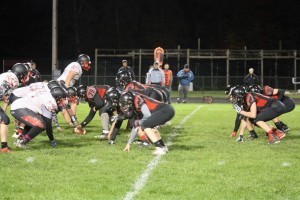 Jake Wells and Melvin Hernandez each had 7.5 tackles to lead the defense. Isaac Justice and Carson Kinder each added 5.5 apiece.

The win advanced the Bruins to round two of the sectional. They will head to Elwood on Friday for a 7pm contest. The Bruins lost their earlier CIC match-up with Elwood 40-20 in a game played at BHS on Friday, October 7.