The Lady Bruins basketball teams traveled to Wabash on Saturday night and dropped their openers to the notoriously successful Lady Apaches.

The Bruins played well early trailing only 10-7 after the first quarter and were within 2 early in the second before Mattie Gearheart went down with a knee issue. Moments later Faith Morris had to leave the game with a leg issue and the Bruins couldn’t keep up. The Lady Apaches stretched the lead to 31-17 at the break.

Morris would return and help cut the lead to 8 in the second half before again heading to the bench. Without the 6’3 center the Lady Bruins did not match up well. Coach Jack Norton decided not to risk things in the fourth quarter and kept Morris on the sidelines. The Bruins were outscored 19-2 in the final quarter and fell 61-35. 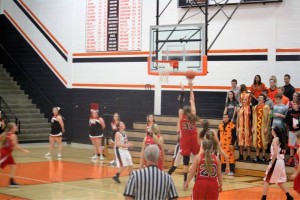 In the JV game, Wabash got off to an 18-2 lead before the Bruins settled down. The Bruins were able to trim the lead to 20-6 at the half but were outscored in the second half before falling 35-10.

The Lady Bruins head to Bluffton on Friday night for a 6pm JV tip. They also South Adams on Saturday at the same time.