Guessing the title of this article either piqued your interest or caused you to skip reading the first time. Either way I hope it is because you are interested in the meaning of “It’s more than bunting.”

So let’s start with bunting.

There is not a coach of any opponent who steps onto Bruin field who hasn’t told his kids “these guys are going to bunt.” They know. I know. And I don’t care that they know it because my goal is to put our kids in the best position to be successful every moment. First, that starts with putting as many kids as possible on the field who are willing to buy in to my philosophy. And as strange as this may sound, a kid accepting the fact that Coach Uggen is going to expect them to lay down a bunt is about as important as anything I ask them to do. But why?

Unfortunately, in talking to most coaches, we do not have enough of those kids yet for whatever reason. It could be a lack of effort to learn the technique. It could be that you are not talented enough to execute a bunt. It could simply be “I don’t buy in with what coach is saying.” It could be “I hate bunting!” Regardless the excuse, and those are all excuses, none of those reasons are going to lead us to more success. In short, I need you to buy in and do what I ask you to do because there is a reason I am asking you to do it. In this case….bunt (i.e. “whatever I ask you to do!”).

Here is list of 10 things right off the top of my head as to why I need you to be able to lay down a bunt…
1. It puts a ton of pressure on the defense specifically targeting the third baseman and pitcher.
2. If your bat is in the strike zone, theoretically, no one can blow the ball by you.
3. In order to put you out, a fielded perfect bunt requires perfect fielding and a perfect throw.
4. It forces defenses to play in which is something most defenses aren’t accustomed to doing.
5. It opens hitting lanes because the closer a defense plays, the quicker a hit ball will get by the fielder.
6. If forces all fielders to be in the right place at the right time. Yes, the third baseman may field it, but the first baseman may have attacked as well so there may be no one to throw to.
7. Nothing unnerves a hard throwing pitcher than giving up a 40’ hit that he can never defend.
8. One bad throw nearly always puts the bunter on third base (or scoring position).
9. A 40’ hit counts the same as a line drive to the left fielder.
10. A good bunter has the ability to dictate what an entire defense does through pressuring them. 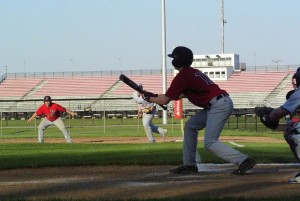 And mind you that doesn’t even include adding the push bunt, but for brevity’s sake, I will stop there. Based on this list of reasons alone, do you need any more reasons as to why you should learn to bunt? In essence, I am telling you that putting down a bunt pressures our opponent. But do you believe it? Are you going to execute when I need you to? If you do, you will be a better player and we will be a better team!

So here is where I grow frustrated. I have taught the same thing for four years yet many times in practices, and sometimes in games, I watch kids time after time lay down a bunt up the first base side. The WRONG side!! Now, don’t get me wrong, if it is on the outer third of the plate, that is where it should go, but our philosophy is “get the ball down the third base line!” So why can’t we do it?

Most of the time it is a lack of effort, we aren’t mentally tough enough, it isn’t important enough to them (i.e. no “buy in”), or they simply are just going through the motions or, worse, could care less. Regardless the reason, I do correct them and often ask where the bunt should go. Sadly, some still don’t know! And they proceed to execute it incorrectly time after time. And on and on the cycle of frustration grows (for me, “Why can’t they grasp this concept?” and for them, “why does he keep hounding me about it?”). It is just not important enough to some kids which translates to “other things probably aren’t that important to them either.”

Again, don’t get me wrong. We do have a few who do it right, but you don’t have much success when only a few are on the same page. The interesting part is that those who do are usually the more successful hitters! How obvious, yet others don’t seem to grasp that point.  And, the sad part is, those who don’t buy into bunting tend not to buy into little else. They play for selfish reasons or reason I can’t may not comprehend. It is almost as if “I know what I need to know.” Well, guess what? That mindset has caused us to lose more often than not. Let’s try something else! Trust me and just “buy in!”

I should add that that selfish mentality will and should not get anyone on the field!! But when you don’t have enough kids who buy in, a coach has no choice but to play kids who shouldn’t be out there! And that is the problem.  We aren’t really playing with a full team of kids who buy into bunting (meaning “do what we need you to do”). So we will struggle until more decide to do so.

If we want to have more success at BHS, we have to have kids willing to sacrifice and trust their coaches. As baseball coach, I need to know “who is willing to buy in to bunting?” I want to know who is going to do what I ask of them every time I ask. If they don’t, I really don’t have a ball player. And sadly, there have been times where I truly believe a Bruin or two has chosen not to execute a bunt out of defiance. Hard to prove, but I believe that. If that is not the case, then it must be because it is not important enough to them. Either reason will not get us to a championship level let alone much success.

They have to buy into the philosophy and spend every moment in practice doing what they are asked to do. And even then we still won’t be where we want to be, for there are numerous other factors that separate two teams that “buy in.” Getting a kid to bunt is just the tip of the iceberg. Weight lifting and just getting kids to practice (that may seem obvious, but missing practice happens way too much at BHS) come to mind. But I will touch on those in later articles.

In the end, “it’s more than bunting” means this….I need to know who is going to learn to bunt because those who do are probably going to be more willing to learn and execute everything else I need them to. If a small task like getting a bunt down is important to them, so will using the proper ground ball technique on a ball hit at them, throwing a change up as a pitcher, or hitting the proper cut-off man on a ball in the gap!  Learning to bunt a baseball will quickly separate those who are capable of becoming great players from those who want to do what they want to do. And you can’t win very often with kids who don’t buy in.

As a coach, I have to find 9 baseball players that buy in. And those kids are sometimes not the best all- around athletes but if I trust that you will at least do as I request, our chances of winning, of even having some success, are increased!

A great quote says it all…. “we play our best 9, not our 9 best.” In short, I look for those 9 kids that cause others around them to rise to the occasion. To get the job done! Those are the kids you win with. And that is part of team chemistry(another topic for another day). And that is another reason why “it’s more than bunting.” Find 9 kids who truly buy in and you will see something that we haven’t seen much of in years.

In the end, and regardless of the sport, I need you to “get the bunt down.” Do the little things that cause you to stand out to a coach. I need you to say “I’m willing to do whatever it takes”….to say “I buy in.” Then, and only then, will you see the transformation from our current struggles to good to great to championship level teams. And that is and should be the goal.

By the way, the same goes for coaches! Do you have high expectations for your kids? Do you push your kids to buy in? Do you buy in or have you settled for mediocrity? If coaches want their programs to get to a championship level, then they have to push their program to work at a championship level. It can be a challenge at times, but someone is going to get there! Who’s going to be first?!

So are you willing to get that bunt down? We do have a few kids who are starting to and they are getting better! Who’s going to join them?! I need 9.