The boys basketball teams hosted the Wabash Apaches on Senior Night Saturday. Despite a great first half effort in the varsity game, the Bruins dropped both on the night. 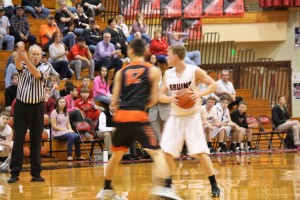 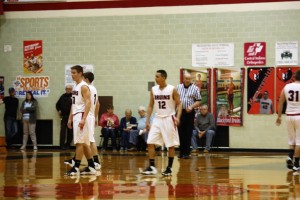 The varsity Bruins, 1-20, jumped out to a 9-2 lead and went on to take a 31-27 lead at the half, but lost guard Andrew Beckley to injury late in the half. Kerigan Reynard started off his senior night very well hitting two 3-pointers and scoring a total of 9 points in the first half.

Coach Scott Clamme shared, “We got off to a great start tonight. I was really happy for Kerigan (Reynard). He scored and rebounded really well in the first half.  In the second quarter, we lost the lead, but the guys didn’t get down, they took the lead right back and held it going into halftime. Unfortunately, injuries become an issue again in the second half. By the end of the game, we had three guards on the bench with injuries. Hopefully, they will be back next week, but we will have to wait and see.”

The JV lost 62-15 to fall to 5-16 on the season. After going into halftime down 14-32, the Bruins were only able to score 1 point in the 3rd and 4th quarter. “We must learn from our mistakes and continue to get better at handling the ball while being pressured by the defense,” shared Coach Grant Newlin. Caleb Mealy, Peyton Hurd, Dalton Willmann, and Brayden Overmyer each scored 3 points.