Zach Tarr went 5-5, double twice, knocked in 3 runs, and got the win in relief to lead the Bruins past Marion 17-12 in a slug fest.

Marion jumped to a 5-1 lead heading to the bottom of the 4th. The Bruins tied it up with a 4-run 4th. Tarr lead off the inning with a single. Tyler Cagle, who doubled in the Bruins first run, followed with a single. Charlie Cranston was then hit by a pitch to load the bases. Tarr would score on a walk to Jake Wells to make it 5-2. Caleb Mealy singled in the hole at short to make it 5-3. Dayton Dow was hit by a pitch to force in another run. Wells eventually scored on a wild pitch to tie the game at 5.

Coach Tony Uggen shared, “we did a nice job battling back. I was concerned about our offense early but we hit the ball as best we have all year in the 4th through 6th inning. It was very impressive.”

The Bruins would fall behind 6-5 on one of their season-high five errors, but the Bruins scored 8 runs on 8 hits in the 5th to break open the game. Tarr doubled to lead off the inning. After a bunt by Tyler Cagle, Tarr moved to third on a wild pitch. Charlie Cranston walked and stole second. Dalton Willmann’s single tied the game at 6. Jake Wells bunt then scored Cranston to give thei Bruins their first lead with Wells making it all the way to third when the pitcher threw the ball down the right field line. The Bruins would go on to build a 13-5 lead and held on for the 17-12 win. 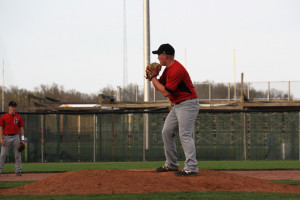 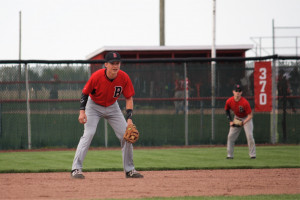 Caleb Mealy and Tyler Cagle each had 3 hits for the Bruins who pounded out a season-high 16 hits.

Jake Ross, Kerigan Reynard, and Tarr held the Giants at bay enough to get the win despite 5 defensive errors leading to 4 unearned runs. Tarr got his first decision of the year to improve to 1-0.

“Our pitching was good enough, but didn’t get much help from our shoddy defense. We walked seven batters which concerns me, but we overcame it with our timely hitting late in the game. We have to get back on track defensively, but Braxton Strait was sick and didn’t play and that forced us to play a few guys out of position. All in all, I am happy we got the win,” shared Coach Uggen.

The Bruins improved to 7-4 and head to Madison-Grant on Thursday for their CIC opener.