The Bruin football team took it on the chin at Jay County in their season opener 43-6. The Bruin fell behind early and were never able to recover.

Jay County dominated the offensive statistics amassing 385 yards of total offense to the Bruins 179. 204 yards for JC came through the air. The Bruins managed 33 from the air using primarily a ground attack.

Jake Deavers rushed for 61 yards on 16 carries and scored the lone touchdown. Austen Lancaster rushed for 30 yards on 12 carries and caught both passes for 33 yards. Blaine Riddle chipped in 26 yards of five carries. Shane Elam rushed two times for 10 yards and completed two passes for all 33 yards. 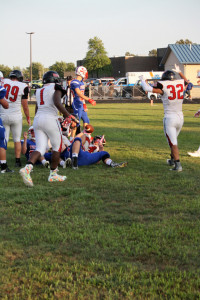 The Bruins host Southern Wells on Friday in the Bruins home opener. Kick-off is set for 7pm.