Jake Deavers rushed 15 times for 168 yards and scored two touchdowns to help lead the Bruins past the Raiders 18-7.

The Bruins trailed after the first Southern Wells drive, but pitched a shutout over the remainder of the game with a bend, but don’t break, defense. The Bruins would cut the gap to 7-6 in the second quarter on Deavers first touchdown run of 36 yards. 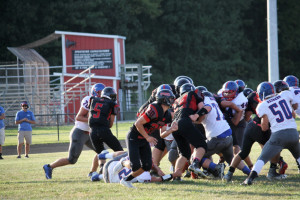 Southern Wells would drive late in the second inside the 10 but the Bruins came up big on fourth and one to stop the drive. The Bruins would regroup, and although they gave up over 300 total yards to the Raiders, the Raiders would never really mount a scoring threat the rest of the game. Deavers would also lead the defense with seven tackles. Shane Elam and Isaac Justice each added six.

After a nice drive, and the momemtum shifting, Austen Lancaster raced 18 yards for the go-ahead score in the third quarter. From there, the Bruins would have opportunities to put the game away and the Raiders had their share chances to regain the lead. The tight game was finally broken open when Deavers outraced the Raider defense on his way to a 52 yard touchdown midway through the fourth to give the Bruins the final advantage. 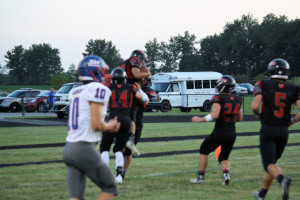 The Bruins amassed 329 yards of offense for the game. All but 32 came on the ground. Austen Lancaster rushed 12 times for 48 yards. Blaine Riddle rushed five times for 27 yards. Elam completed two of seven passes, both to Riddle, for 32 yards.

Punting and penalties favored the Bruins. Deavers averaged 34 yards on three punts which was 10 yards on average farther than the Raiders punter on the same number of punts. The Bruins also committed seven less penalties for 40 less yards than their opponents.

Coach Randy Sehy shared, “It’s nice to get a win in front of the home crowd. The team played great defense and stepped up big when it had to.”

The Bruins are now 1-1 on the season and 2-2 over the course of the last four games dating back to the ’16 sectional. They face a very good Missisinewa team at 7:00pm on Youth Cheer Night next Friday at BHS. The Indians, the pre-season favorite along with Eastbrook in the CIC, come in 1-1 after a 32-26 loss to New Haven.