Carson Kinder ran for three touchdowns including a 59 yarder on a crucial 4th and 1 late in the 4th to lead the Bruins to a 20-15 win over Frankton in what was one of the most exciting finishes in recent memory for many at Bruin Field.  But the TD left the Eagle offense with plenty of time for their high-powered offense to work some magic of their own, and they almost did, before the only turnover of the game with 15 seconds to go in the game at the Bruin 1-yard line ended their hopes and secured a Bruin victory.

The Bruins amassed 359 yards of offense, all on the ground, in a game in which both teams sustained long, clock-eating drives throughout. The Eagles piled up 296 yards of which 169 came via the air on 20 of 35 passing from Travis McGuire who also scrambled for 84 yards on 11 carries.

Frankton struck early as Drew Berkebile eventually scored on an 8-yard run to give the Eagles a 7-0 lead after their opening drive. The Bruins would respond with the first of Carson Kinder’s touchdowns on a 1-yard run and Bode Malott PAT at 1:36 of the second quarter to tie things at 7-7 heading in to the half. 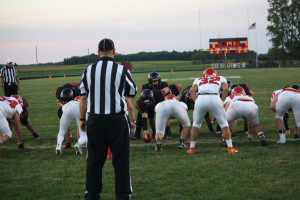 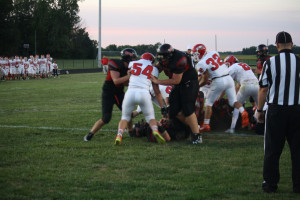 After a docile third quarter of long, but fruitless scoring drives, the Bruins would take their first lead of the game after a nice drive ending in a second 1-yard touchdown run for Kinder who finished a spectacular game with several punishing runs totaling 156 yards on 20 carries. Malott added the PAT and the Bruins lead 14-7. But things were just only getting very interesting for the nice-sized crowd in attendance.

Frankton was left several minutes to make what most thought would be their last chance. The Eagles quickly worked their way into Bruins territory with precision passing picking up most of their yardage. The Bruin finally got the Eagles where they wanted them with the Eagles facing a critical 4th and 10, but the nibble-footed McGuire spun his magic again avoiding 4-5 Bruins who had chances to sack him only to break free for a 14 yard run for the first down. He would later fire a bullet to wide receiver Sabastian Davis on yet another 4th and 10 for a 30 yard touchdown to cut the lead to one. Eagle Coach Robert Ryan opted to go for the win and turned to his senior quarterback yet again who raced in for the conversion to put a damper over the Bruin faithful and gave the Eagles their first lead since the first quarter, 15-14. Unbeknownst to all, the game was far from over with 5:56 to go in the game.

One of the few Bruins mistakes all night occurred on the Eagle touchdown as a personal foul penalty resulted in the Eagles kicking off from the Bruin 45. The first attempt spun wildly out-of-bounds which confused many Bruin fans who felt the Bruins would get the ball at the 35-yard line, but, due to the penalty,  apparently would have given the ball at the 20. Coach Randy Sehy, hoping for better results, opted to have the Eagles re-kick which resulted in Shane Elam being tackled at the Bruin 7 yard line. Undaunted, the Bruins would soon establish the fact that they weren’t done as two big runs by Blaine Riddle and Kinder moved the ball quickly over the 30.

With the Bruins 0 for 6 passing, the Eagle defense stacked all 11 men “in the box” to pressure the Bruin offense as they had for much of the second half. Down to possibly their last gasp on 4th and 1, it was Carson Kinder who came up big yet again, racing 59 yards off right tackle for a touchdown with just under two minutes remaining in the game. The conversion attempt failed, but the Bruins lead 20-15.

Again, McGuire and the Eagles responded moving to the Bruin 25 yard line or so with just under a minute remaining. Another pinpoint throw and catch was made to the 3-yard line seconds later in which a Bruin defender, possibly Isaac Justice among them, put a bone-jarring hit on the receiver causing what appeared to be a fumble. The Bruins recovered what they thought would be a game-ending turnover. In the rush of excitement spreading through the Bruin faithful, it was ruled to be an incomplete pass to the dismay of all on the east side of the field and to the joy of all on the west side.

With a breath of new life, the Eagles worked their way to the Bruin 1-yard line with a fraction under 15 seconds remaining the game.  With most holding their breathes, and nearly all expecting McGuire to yet again take a shot-gun snap with the intention of racing for the go-ahead touchdown, the only  turnover of the game  finally occurred at the most opportune time for the Bruins. McGuire couldn’t quite grab the snap and fumbled it forward towards the goal line before being recovered by the Bruins at around the 2-foot line and the Bruins and the east side crowd went wild as the Bruins held on for an exciting 20-15 win and the first winning record, after five games into the season, since 2008. 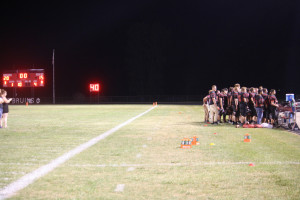 Several Bruins had big games offensively in what turned out to be a very balanced rushing attack. Austen Lancaster rushed for 74 yards on 15 carries. Blaine Riddle rushed for 61 yards on 13 carries. Shane Elam rushed for 57 yards on 6 carries including a nifty big run on the drive that gave the Bruins a 14-7 lead early in the 4th that delighted the crowd at the time. Quarterback Caleb Mealy rushed one time for 11 yards. Mealy had actually scored on the Bruins long opening drive of the game, but a holding penalty negated his effort, and the Bruins eventually turned the ball over on downs.

The Bruins return to Bruin Field next Friday for a 7pm contest with Alexandria. It is also Homecoming so a big crowd is expected to cheer on Coach Sehy’s much improved Bruins who continue a very exciting ’17 campaign.