The Bruins and Alexandria Tigers put on yet another exciting show for all fans at Bruins Field. It would turn out to be the second straight game that came down the final minute before being decided. This time, unlike the defensive struggle last week with Frankton that had a high-scoring fourth quarter, it was the offenses that lit up the board for three quarters and ended in a defensive struggle throughout the fourth quarter.

Both teams literally exchanged scores the entire night in a game that never was a difference of more than eight points that being the difference after the Tigers final score of the night. A costly interception late in the second half lead to an Alexandria score. The Bruins would later fumble midway through the fourth but the Bruin Defense stepped up giving them one last opportunity to the game. Unfortunately, the Bruins could not convert on a fourth down and short and the Tigers held on to win the game.

Neither defense had much luck figured out their offensive counterparts as both teams racked up 742 yards of offense between them with the Bruins holding a 384-358 edge. The Bruins managed all but 18 yards on the ground while the Tigers were more balanced with 196 of their yards coming through the air.

The Bruins struggled all night trying to stop sophomore QB Rylan Metz. He connected on 10 of 11 passes including 4 touchdown passes to three different receivers. Bruin signal caller, also a sophomore, Caleb Mealy completed one of three passes with an interception. Dalton Willmann caught the lone pass for 18 yards.

Blaine Riddle led the offense rushing 19 times for 133 yards. Carson Kinder rushed 11 times for 112 yards. Shane Elam carried the ball 13 times for 65 yards and returned three kick-offs for 87 yards. Austen Lancaster rushed 9 times for 50 yards before leaving the game with an ankle injury that could prove to be serious. Mealy added six yards on his lone carry. 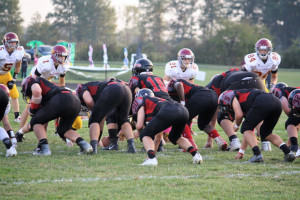 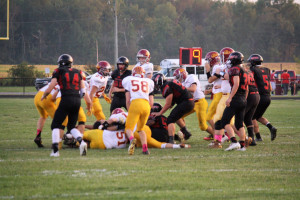 The offense was so effective that the Bruins did not punt the entire game.  They also played the entire game committing only one penalty for 15 yards. Alexandria punted only twice but effectively averaging 47 yards a punt. They only committed three penalties for 15 yards.

The loss was a tough one for the Bruins as it removes much of a chance to compete for a CIC title, but the Bruins still have a great shot to finish in the upper half of the conference. One thing that did not change was that the Bruins are certainly very entertaining and competitive as they did both well last night in front of a large Homecoming ’17 crowd. Emma Holmes was crowned queen and Trey Sills was crowned king.

The Bruins head to Elwood and Madison-Grant the next two weeks before returning to Bruin Field to host CIC leader Eastbrook on Senior Night on October 13. All three games begin at 7:00pm.