The Football Bruins marched up and down the field most of the night, but so did their opponents at Elwood. The Bruins would battle to the last minute as they had in three of their last four games, but came up a point short in losing 40-39.

Elwood scored less than 100 seconds into the game, but the Bruins bounced back by marching the length of the field scoring on a 6-yard run by Carson Kinder. Bode Malott add the PAT and the Bruins led 7-6. Elwood would again march the field and score to take a 12-7 lead. The Bruins again responded with a nice drive ending on a 3-yard TD run by Isaac Justice. Malott was successful on the PAT to put the Bruins up 14-12 heading to the second quarter. 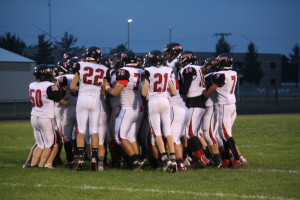 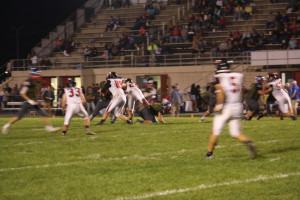 The Bruin D finally made a stop and the offense  responded with a two play 58 yard drive of which all 58 yards came on a Caleb Mealy to Dalton Willmann touchdow pass. Malott made his third straight PAT to give the Bruins a 21-12 lead. The Panthers would respond yet ending in a Jake Wilson run and conversion to make it 21-20 heading to the half on Senior Night at Elwood.

The Bruins wasted no time in scoring to up the lead in the third quarter. Mealy again hit Willmann for a TD pass, this one of 14 yards. Malott missed his first PAT of the game. The defense forced another stop and the Bruins went on a long drive with some punishing runs by Justice and Carson Kinder. Kinder eventually scored on a 9-yard run with 6:46 to go in the third and, after a missed conversion, the Bruins still looked in control with a 33-20 lead. 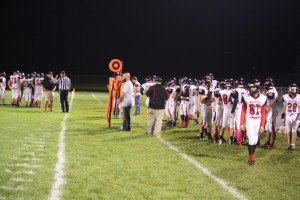 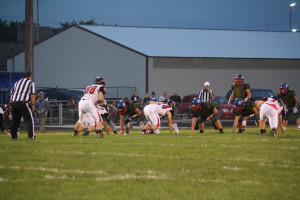 Elwood would not quit. They rebounded with a scoring drive ending in a 32-yard run up the gut to make it 33-26 before the Bruins would commit their only turnover of the game, a fumble on the kick return by Terrence Wilson, that gave the Panthers the ball at the Bruin 27. Elwood would capitalize with another quick score by the speedy quarterback Jake Wilson, who also added the conversion, to take a 34-33 lead.

The Bruins kept pace by putting together yet another scoring drive with Kinder scoring on a 2-yard run. Kinder missed by a foot of getting the conversion, but the Bruins led 39-34 with 10:34 left on the clock. But Elwood took only 38 seconds to storm back into the lead with another TD. The conversion failed, but the Panthers led 40-39. The Bruins had two more chances. The Bruins were stopped on fourth down on the first drive. Elwood then marched the field and looked like they would score on a fourth down pass but the receiver dropped the pass giving the Bruins life.

With one last gasp, the Bruins marched and short-passed their way from their own 17 with 3:51 to go to the Elwood 35 with a minute to go and 2nd and 10. Unfortunately, the Bruins got to 4th down and quarterback Caleb Mealy slipped trying to roll out to pass to basically all but end the game.

The Bruins played well offensively, but a couple of their very few penalties proved costly in the end by putting the Bruins in longer yardage situations. Neither team played much defense, but you have to hand it to both teams as the offenses were brilliant for the most part.

Caleb Mealy completed 6 of 12 passes for 120 yards and two TDs to Dalton Willmann who caught three passes for 94 yards in the game. Riddle caught two passes for 14 yards. Justice caught one pass for 12 yards. The Bruins had 32 first downs to 21 for the Panthers.

The Bruins host 2A, #1 Eastbrook next Friday for Senior Night. Senior Night recognition will occur around 6:40pm prior to the game. Kick-off is set for 7pm.