The Bruin football team faced a difficult challenge on Friday night in hosting undefeated, and #1, Eastbrook on Senior. The Bruins played a very good first quarter, despite being down 14-0, but the Panthers darted away with 21 points in the second with a wealth of speed that the Bruin D could not match. 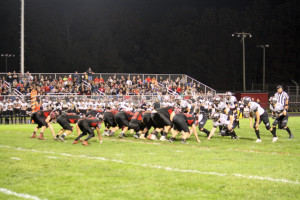 The Panthers totaled 483 yards to the Bruins 291 and headed home with a 63-0 victory. The Panthers accomplished that total in only 28 plays from scrimmage. The Bruins used 72 plays, mostly on the ground, but sophomore signal caller Caleb Mealy did complete 3 of 10 passes for 52 yards. The Panthers were 0-3 in the air.

Carson Kinder rushed 19 times for 80 yards against a stingy defense. Blaine Riddle ran 10 times for 58 yards most coming on a near 30 yard run in the second half. Shane Elam ran 7 times for 38 yards. Isaac Justice carried the ball 12 times for 29 yards before leaving the game early in the second half with an injury. Ethan Miller and Bryce Berry each ran the ball twice for 5 yards. 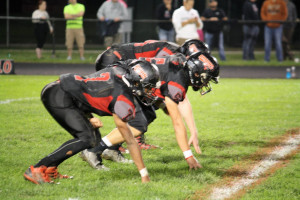 The defense had a rough time with the Panthers speed. 6 Panthers averaged over 14.7 yards per carry. 2 others averaged over 7.5. Joey Payne made 4 tackles before leaving the game in the second half as well with an ankle injury. Justice made 3 tackles.