It was a tale of two halves last night at Northwestern High School where the Bruins opened Sectional 26 play. According to the Sagarin ratings, the Bruins were 13 point underdogs. But the Bruins stormed out to a 21-0 lead by dominating the first half on both sides of the ball. But the second half turned into a turnover-fest and the Bruin defense had to survive the kick-return team’s inability to field an onside kick to advance in the tournament.

Carson Kinder would score three and half minutes into the game on a 4-yard run to cap a nice opening drive as the Bruins set the tone for the first half. Bode Malott added the PAT and the Bruins led 7-0. The defense played brilliantly throughout the first half putting the Tigers in 3rd and long situations and defending the pass well.

Shane Elam and Kinder would score second quarter touchdowns with Malott staying flawless with his kicks, and the Bruins lead 21-0 midway through the second quarter. But eventually the turnover bug hit the Bruins giving the Tigers a chance late in the half by recovering a fumble just inside the Bruin 30. After picking up a first down with under two minutes to go, the Bruins tightened up and eventually forced the Tigers to give up the ball on downs around the Bruin 15. The Bruins took the 21 point lead into the break.

The third quarter seemed to stay in the Bruins favor until fumble number two gave Tigers the ball again inside the 25. It took only two plays, the last a 21-yard run, the finally put the Tigers on the board, 21-7 midway through the quarter.

The Bruins would respond with a nice drive ending in Kinder’s third touchdown of the game, this time from 3-yards out, to seemingly put the game out of reach after the Malott PAT made it 28-7. But this game was far from over with plenty of unsure moments in both sets of stands. 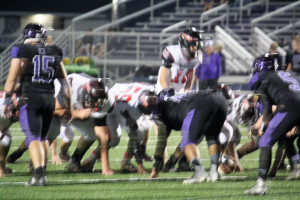 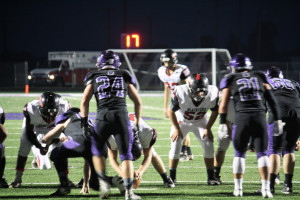 Body Malott’s kick-off sailed past the Tiger return team and bounced into the end zone to force the Tigers to march 80 yards for any chance of a comeback. Northwestern wasted no time. After a 1-yard loss, a Tiger running back broke a tackle at the line-of-scrimmage and raced down the near sideline 81 yards cutting the lead to 28-14 with just over nine  minutes to go.

An onside kick seemingly coming, the Bruins played it tentatively and the Tigers recovered. All of the sudden the “new life” Tigers had life and covered the remaining 48 yards with a mix of big runs and timely passes, most over them middle, to cut the lead to 28-21 with under six minutes to play.

Anticipating another onside kick, the Bruins were once again unable to cover it and the Tigers had their chance to make things very interesting for all in attendance. And did. They covered the distance in less than four minutes ending with a short TD pass caught in the left near corner of the end zone to cut the lead to one with 1:32 to play. Sensing the momentum was now heavily in his favor, Tiger first year coach Steve Disler opted to play for the win. After calling timeout to talk it over, the Tiger seemed to have called the exact same pass play that they had just scored on with the quarterback rolling to his left. This time, the Bruin D covered it very well forcing a pass that, even if caught (it wasn’t), would have been caught out-of-bounds. The Bruins had dodged a bullet and lead by one.

Needless to say, all in attendance knew what was coming and, sure enough, the Tiger sophomore kicker kicked another perfect onside kick that three, and maybe four, Bruins had their hands on, but could not come up with it. The Tigers had pulled off their third straight onside kick to the dismay of all on sidelines and those in red, white, and black in the stands.

Coach Sehy’s defense returned to the field for the fourth straight time without a break to fend off one effort by the Tigers. But seconds later,and with just over a minute remaining, Shane Elam came up big with an interception of long pass that most would call a “duck” that was high but way too short aimed for the receiver racing down the numbers on the far side of the field. The Bruins had avoided a nightmare. 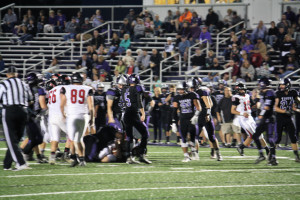 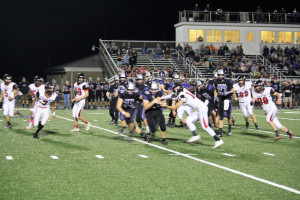 With only one timeout remaining, sophomore signal caller Caleb Mealy took three snaps and dropped to his knee as the Bruins ran out the clock and advanced to sectional round two. The Bruins walked away surviving four costly turnovers via fumbles. But also nearly kept pace by recovering a Tiger fumble and getting interceptions from Isaac Justice and Elam.

The Bruins out gained the Tigers 239-141, but the hosts were more effective in the air 138-31. Most of their yards came during the furious fourth quarter comeback. Thankfully, the outstanding first half by the Bruinsmade it just a hair too difficult to overcome. Kinder rushed rushed 19 times for 108 yards. Isaac Justice carried 8 times for 64 yards. Blaine Riddle carried it 8 times for 34 yards. Jake Deavers added 5 carries for 25 yards. Caleb Mealy completed two passes for 31 yards to Tyler Cagle and Dalton Willmann.

Isaac Justice had 6 tackles and the interception to lead the Bruins. Jake Deavers contributed 5 tackles. Kinder chipped in 4.5 tackles and Dylan Thomas added 4 of his own. 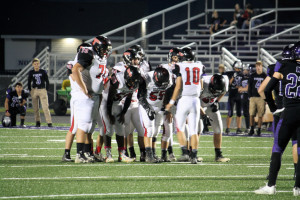 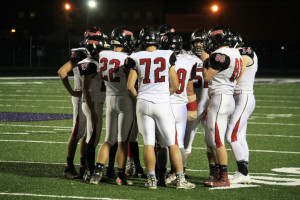 The Bruins will host (Indianapolis) Brebeuf Jesuit next Friday night at Bruin Field. The game is tentatively set for 7pm, but may get pushed back to 7:30pm due to the long drive for the Braves who are now 6-4. They defeated Guerin Catholic (6-4) 21-6 last night to advance. It was the second time they beaten the Golden Eagles this season.

Tickets will be $6 at the gate. We hope to see a large, and positive, loud crowd to support the Bruins who are now 5-5. With their fifth win, the Bruins tied their overall win total of the last four years combined. Great job Bruins!