The Bruin football ran into one of Class 3A’s finest in the Brebeuf Braves and, despite playing without several starters for various reasons, overcame those obstacles to battle for 48 minutes. The Bruins eventually lost the game, but ended their second season under Coach Randy Sehy 5-6 equaling the win total of the past four years combined. Coach Sehy remarked, “On a cold, rainy evening, we played hard to the end. Guys stepped-up and filled in where needed, playing to the best of their ability.”

The Bruins shined on the first play of the game with Joey Payne darting 35 yards up the middle to the surprise of the visiting Braves. The Bruins would gain another first down before a fumbled snap forced a second and long and the Bruins could not quite recover, giving up the ball eventually on downs, but effectively churning up over six minutes of clock which was a goal for Coach Sehy knowing the challenge of the evening.

Brebeuf responded by scoring six plays later to take a 7-0 lead with just over three minutes to go in the first. The second drive ended with a bad punt snap leading to a one-play, 29 yard drive to boost the lead to 14-0 for the Braves who improved to 7-4. 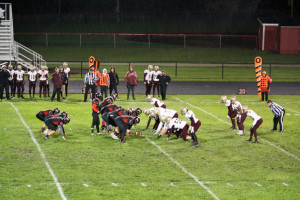 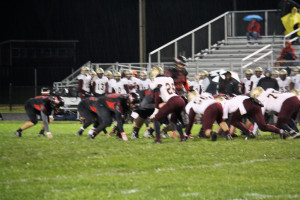 An injury to senior running back Carson Kinder forced quarterback Shane Elam to replace him and the Bruins turned the offense over to junior Brandon Apple who played well the rest of the way despite limited varsity experience. But the loss of Kinder also put a damper on the defense who were already thin in depth coming in. The Braves took advantage scoring on a 12 yard pass and took advantage of a late first half fumble that resulted in a 35 yard touchdown run putting the game out of reach, 28-0 heading to the half.

Two special teams plays let downs, a kick-off and punt return, lead to a 42-0 lead after three. But the Bruins continued to fight and scrap and finished the season with a couple touchdowns late in the game against Braves who played several different kids throughout much of the second half showing some great sportsmanship in knowing the Bruins were overmatched. Terrence Wilson scored on a 31 yard run and Quinten Teer scored on a 34 yard run both on dashes up the middle. Freshmen Bode Malott finished a great year as the new kicker by hitting both points after. The results of which made the final 42-14.

The Bruins out gained the Braves 258-227. All the Bruins yards came via the ground. The Braves completed just one pass which resulted in a second quarter touchdown. Shane Elam rushed 12 times for 58 yards. Blaine Riddle finished his career with 10 carries for 55 yards. Terrence Wilson rushed 4 times for 53 yards. Quinten Teer rushed the one time for 34 yards. Joey Payne added 7 carries for 32 yards.

One great comment via text came after the game from Brebeuf A.D. Ted Hampton who shared that the Brebeuf players have never played against more nicer players in the Bruins who represented their community very well last night.

Coach Sehy expressed his appreciation for the efforts of his seniors, “Thank you to the seniors for giving us their time and energy. Oliver Baronick, Tyler Cagle, Glen Dyer, Jacob Heine, Carson Kinder, Blaine Riddle, Dylan Shroyer, and Dylan Thomas you will all be missed and we wish you the best in the future. Remember: Once a Bruin, always a Bruin.”

Several starters will return and with the addition of a few kids who may not have played this year, and with a lot of hard work in the off-season in the weight room and open gyms, could have an exiting future!