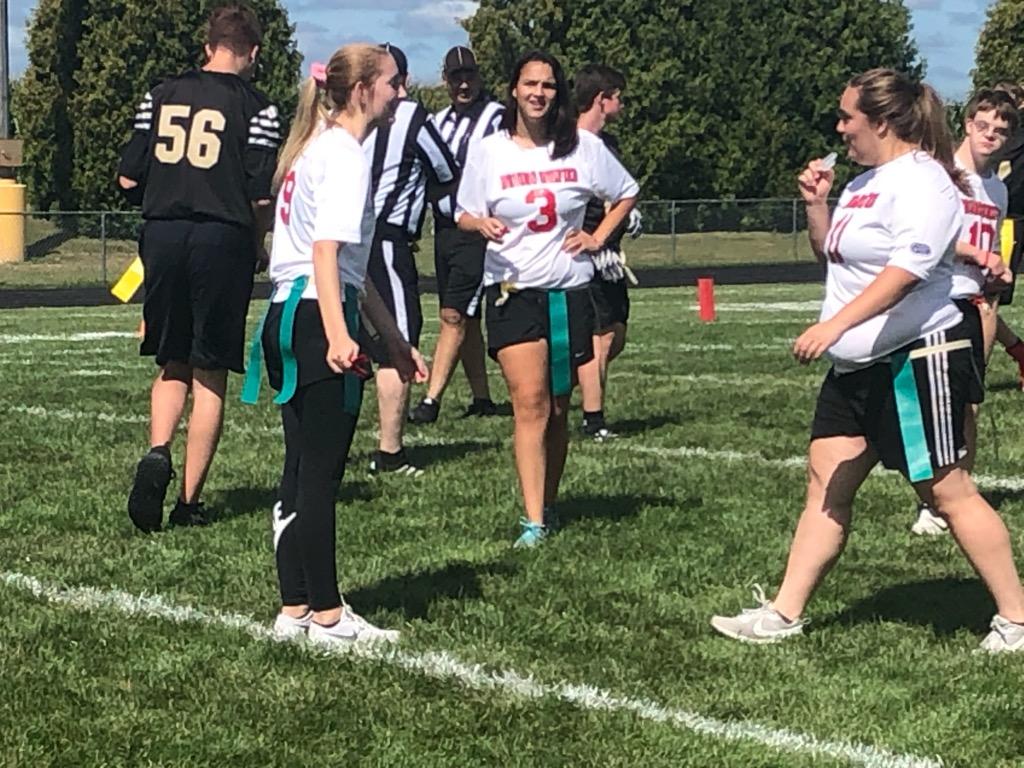 The Bruins would have a quick turn around for their second game of the day to face the Twin Lakes Indians. The Bruins would get off to a slow start with their first play being blown dead because of a miss snap that hit the ground. That would set up second down, where Emma Jacobs handed the off to Kyler Brock for a two yard run. On third down Emma Jacobs pass attempt would be intercepted.

The Indians would get off to a fast start scoring on their first play and the Bruins would hold them on the 2 point conversion with an interception by Erin Cagle.

The Indians second drive consisted of a incomplete pass on first down. For second down a rushing Jen McCaffery broke up a pass play that resulted in a incomplete pass. The Indians would score on a third down run play and converted the two point conversion extending their lead to 13-0.

The Bruins would open their third drive with a Erin Cagle 4 yard completion to Logan Wilson. That would set up second and 11, where a pass attempt from Austin Brooks-Curry would be intercepted.

The Bruins fourth drive would start with a 4 yard run by Angle Thomas. That would set up second down where Kyler Brock would get the ball for a 1 yard gain. On third down needing to get to mid field Erin Cagle handed the ball off to Emma Jacobs for a 8 yard rush. The Bruins would fail to convert on fourth down with a pass attempt from Emma Jacobs intended for Kyler Brock would fall incomplete.

The Indians would score quickly extending their lead to 26-0 on their first drive, but the Bruins would hold them on the conversion for 6.

The Indians would waste no time scoring and converting extending their lead to 33-0.

The Bruins got their offense going on their sixth drive. Austin Brooks- Curry pass to Angle Thomas would fall incomplete. A five yard run by Kyler Brock would get the offense going. third down a 30 yard Logan Wilson reception form Erin Cagle would get the Bruins into the red-zone. The bruins would get stopped on fourth down.

The Indians would come out and catch the Bruins off guard with a reverse and would score on their first play going 35 yards. extending their lead to with a two point conversion to 41-0 .

The Bruins would open their seventh drive with a Austin Brooks -Curry completion to Angle Thomas for a 35 yard reception to put the Bruins on the board. The Bruins would go for two but the two point conversion would be no good 41-6.

The Bruins defense would step up and force a four and out on the Indians next drive.

Feeding off of the defensive stop the Bruins started their eighth drive with a 10 yard run by Logan Wilson. On second down Jen McCaffery would carry the ball for five yards. That would set up third and short for a Kyler Brock 15 yard run. The bruins would be stopped once again by the tough red-zone defense of the Indians.

The Indians would score for the final time on their next drive with a quick throw and score, but the Bruins would not allow the Indians to convert the PAT. With time running out the Indians led the Bruins 47-6.

The Bruins Would come out fast for their 9th drive with Angle Thomas going 35 yards to cut into the Indian’s lead. The Bruins would only add six failing to convert the 2 point conversion 47-12.

Going into the next Indian possession the Bruins knew of they were to get back into the game they would have to get a stop. They did by not allowing the Indians to get a first down.

The Bruins would come out to start their 10th drive of the game with Jen McCaffery rush for 35 yards on the first play of the drive scoring. The Bruins would go for two, but fail to convert. They cut the lead to 47-18 with the clock running down.

The Bruins would stop the Indians on their next drive not letting them get into the end-zone. On the next Bruins drive Jen McCaffery would go 30 yards to score for the Bruins Final score of game and day. They would miss the 2 point conversion, and the Indians lead was now 47-24.

The Bruins defense would come out for what would be the Indians second drive and hold them to a four and out.

With time running down Coach McDonald would use his only time out with 2:45 left on the clock preserving time while the field was reset for the Bruins next and what would be their final possession of the game( Unified Flag Football plays with a running clock and each coach has only on time out). Kyler Brock would get the Bruins drive started with a 10 yard run. On second down Jen McCaffery would carry the ball for 5 yards just short of a fresh set of downs. The Bruins would hand the ball off to Kyler Brock on third down and he would take it for a 15 yard rushing touchdown as time ticked under a minute. To put the Bruins on the board for the final time of the game. The Bruins would go for two with Erin Cagle attempting to pass to Logan Wilson, but the pass would fall incomplete. Final score Twin Lakes Indians 47 Unified Bruins 24.

” This team has come a long way from last season, If you look at how much we have scored between both games we have already scored more than last season in total.” Coach McDonald said after the game. ” I’m proud of the team as a whole, we persevered through this whole game. Staying after it on defense and making stops. Driving the ball down the field even if we were not scoring at the end of them is something to be proud of and to build off of .” added Coach McDonald.

Leading the Bruins in Rushing was Jen McCaffery with 73 yards (a new school single game rushing record) with two touchdowns on 4 carries.
Kyler Brock touched the ball 4 time for 31 yards
Angle Thomas rushed for 43 yards on 3 carries with a touchdown
Emma Jacobs had 2 carries for 12 yards

Leading the Bruins in the passing game was Austin Brooks-Curry throwing for 35 yards on 3 attempts , 1 completion, 2 interceptions and a touchdown.
Emma Jacobs went 2-4 on the day for 5 yards and a interception
Erin Cagle went went 5 for 5 for 32 yards

Leading the Bruins in Receiving was Angle Thomas with 1 reception for 35 yards
Jen McCaffery had 2 catches on the day for 22 yards
Logan Wilson had 2 catches for 22 yards and a touch down and Kyler Brock had 1 catch for 4 yards.

See your Unified Bruins in action this Saturday as the travel to Mississinewa for a 3-way day along with Marion first game tentatively scheduled to start at 10 am.